I graduated from Cal State University Long Beach with a Bachelor's degrees in Physical Education and a minor in Spanish. I first started teaching at Snow Valley in Lake Arrowhead in 1980. In 1982 I switched to Snow Summit in Big bear Lake Ca.
In 1992 I moved to Tahoe and taught at Alpine Meadows. As a member of the PSIA W Examiners squad I met Jimmy Ackerson and was invited to teach at Portillo in the Andes mountains of Chile.
In 1984 I became a Los Angeles County Lifeguard. By 1985 I was teaching Junior lifeguards and working towers in the summer. I taught JGs through 1998. After a 16 year brake just working towers I came back to teaching JGs in 2014 and 15 to teach my 2 son's C group.
My first teaching job was at Lennox Middle School where I taught for 2 years before coming to MBUSD's MBI in 1994, which became MBMS in 2000, where I worked until coming to Mira Costa in 2009 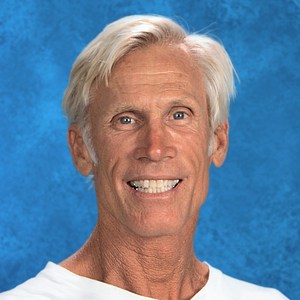